What do the NHS and Desert Island Discs have in common?

I was thinking about my playlist as I travelled on yet another 600 mile round trip. Should I include ‘Honky Tonk Women’ by the Stones, ‘Stay with me’ from the Faces (not the Sam Smith song – please no!), perhaps Otis Redding with‘Try a little tenderness’ or Led Zeppelin’s ‘Black Dog’. Could finish with a live version of Lynyrd Skynyd’s ‘Free Bird’ – should we go Country Rock – say the Eagles or Bonnie Rait. Yes – my iPod is firmly set to the past. I know there are some popular people around currently like Drake or Rihanna or Ed Sheeran but there you go, it’s the 60’s and 70’s for me.

Which as ever, brings me to the NHS. It was obviously so much better in the past. I mean, look at the headlines again this week; “failure is the norm at some NHS Trusts”, “The NHS has no wriggle room”, “current performance suggests we’ve had 3 years of failure”, or as Dr Mark Holland (Society for Acute Medicine) says “The system is close to breaking down”.

“Can we cut costs any further without cutting services?”
“We can’t match resources to demand says Government”
“Too much paperwork, nurses can’t do their job, its unsafe”

Well, actually the last three quotes are headlines from the 1950’s in the nursing press and from Government reports. So just like I might feel 70’s music was incomparably better than the music my children listen to it is of course all a matter of expectation, taste, circumstances and the culture of the times we live in.

The past is not better; it’s just a different place. Expectations of music were different just as our expectations of today’s NHS and wider public services are different now. I can remember how long it took to have a telephone installed – months waiting; how horrible some of our town centres were; how violent our football matches were (both on and off the field!); how limited our range of food and clothing was in the shops; despite current problems, how awful our trains were in punctuality and condition; how impossibly dream like even the most basic of today’s cars seemed then; what a fantasy mobile computers pretending to be phones seemed and so on.

So why do we persist in bashing our public services?

We’ve failed to hit urgent response time standards or we only hit 95% of A&E four hour waiting times. We are missing some urgent cancer patients outside a two month window and our delayed transfers of care are up by 23%. Yes, we could be doing better and yes we spend billions of pounds of taxpayers’ money and have a right to see improvements. But we also have seen a rise in A&E attendances year on year. In 2003 some 14 million attendances were recorded – since then we’ve seen it rise to 22.3 million – a rise of 35% and more people are being admitted to hospital from A&E – an additional 365,000 or 10% rise.

So we moan, but we add fuel to the problem. We restrict funds to the service but we massively increase our use of it. We demand efficiencies and streamlined integrated services, but we expect more and more scrutiny and reporting at every level. This all eats up resources and even something as simple as encouraging trusts to work together to streamline back office functions becomes hijacked with oversight frameworks, template reports and reporting structures, scoring charts and response sheets. Just do it!

We over complicate a system already under stress by putting in place a false ‘market’, technical challenges about tariffs in a system already with provider deficits of £600m. We have built in system expectations that CCG budgets will be achieved because providers will be fined for failure and we continue to encourage trusts to do more on the promise of earning more income then moan because we don’t have an integrated care package based around preventing hospital admissions.

I am a passionate defender of the NHS but, I am with Lord Carter of Coles when he said: “I wrote a report 10 years ago showing how to save £300m per year and we blew it”, “we can still do it but we have to drive productivity”. The report he referred to was about pathology services whilst his most recent efficiency review flagged potential savings of up to £5bn per annum. The sad and frustrating fact is that some trusts instead of saying “OK, not sure about the accuracy of the £5bn but we can still make huge savings” would rather seek ways of not delivering savings or challenging their bit of the target.

Indeed the Royal College of Pathologists pointed out, with some justification that if decisions are based on something that is done very quickly there is a huge risk that things will go wrong. That is of course potentially true but by the same token doing nothing whilst waiting for everyone to have their queries addressed, concerns mitigated or personal issues resolved means that little change occurs and momentum is lost.

In my little world if the opportunity to make a proportion of these savings can be realised perhaps with help from other NHS partners or the private sector why aren’t we? I see today one of the Labour leadership candidates is suggesting the Government has a ‘secret plan’ to privatise the NHS because 8% of healthcare spending was bought from private providers. This is the same candidate who worked as a lobbyist for drug company Pfizer of course. The NHS needs a supply of services from a variety of sources and a mainly publically funded system free at the point of use isn’t incompatible with that set of supporting skills. So let’s not look back and say how wonderful the NHS was and knock it now. Let’s focus on why there are challenges now and ask the financial, political, structural and efficiency based questions and then be open minded about how we continue to improve it.

Still whilst I accept life wasn’t better necessarily in to 70’s, nor was the NHS, the music certainly was! 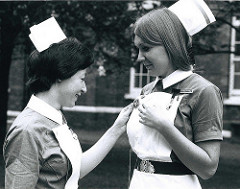 Is there another 70 years in the NHS?

Motorway Musings over a pasty

Believe what you read or read what you want to believe?

What do the NHS and Desert Island Discs have in common?

Change: Does it really change anything?

A land model for future provision of elderly care

Give Back Day brings Ryhurst together with NHS Trust

A future land model for elderly housing and care provision

Is there really surplus land in the NHS?

With NHS high risk maintenance now at £10bn, are SEPs the answer?

Ancora House, a place of refuge and support

The Carter Review: How are Ryhurst's JVs responding?

An overview of the Strategic Estate Partnership (SEP) market

What makes our SEP model different?